skip to main | skip to sidebar

Where did they come from ? 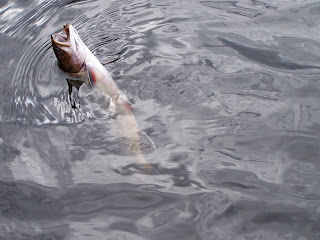 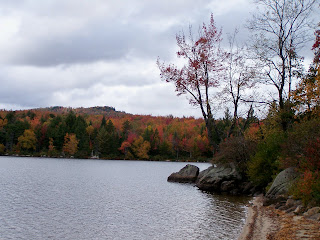 With the final days of trout season here my wife and I decided to squeeze in one last trip way up north to a remote pond that holds some beautiful wild brook trout. This particular pond is not stocked and the brookies there this time of year have brilliant colors and fight like mad.

Well unlike the trip there in mid September when the fish were up feeding on giant may flies, this trip with a.m. air temps in the 20's, they were no where to be found. I tried fishing deep with streamers and nymphs. I cast to the submerged logs and rocks along the shore line, which normally gives up a few of the smaller trout,like the one pictured above, but the fish were not feeding.

After covering a lot of water we decided to get out of the canoe and try the outlet of the pond, well with all of the recent rain the stream was running extremely high, in fact it was over the banks which made the fish able sections few and far between.After working down stream a ways we came to a really nice looking hole. There was fast water coming into the hole with lots of cover on the far bank and a fallen tree across the tail of the pool.

I still had the black woolly buggerhttp://www.anglersflybox.com/bh-woolly-bugger-black.html tied on and worked my way through the run. Not having any hits thus far I cast across the pool to the far bank and let the fly swing across the tail of the pool under the fallen tree. When the line came to a sudden jolting stop I knew it was a good fish, then unexpectedly the fish jumped out of the water higher than I had ever seen a brook trout jump. I'm thinking holy s---t,I yell to my wife look at the size of that brookie! then the thing jumps again what seems to be about 2 feet straight out of the water!, what's with this trout?.

Well several minuets later I find out what was with the giant brook trout. It was not a brook trout but a beautiful land locked salmon. I removed the fly from the large salmons kyped jaw, and released him back into the stream,and immediately the question as to where the salmon came from hit me.

After landing the salmon we headed back to the canoe which was stashed where the out let tumbles from the pond. Back out in the pond not more than 50 yards from the outlet I get a solid strike, And once again a fish comes rocketing out of the water, and moments later my wife slid the net under another land locked salmon.Where are they coming from?

As we paddled back across the pond and up the flow towards the car we pondered where the mystery salmon came from. The pond and stream that flows from it are not stocked, so that means they must have come from a lake down stream many, many miles. Where ever they came from it was definitely a treat to land two salmon in one afternoon of trout fishing !.
Posted by The Anglersflybox at 6:11 PM No comments:

Posted by The Anglersflybox at 9:22 PM No comments: 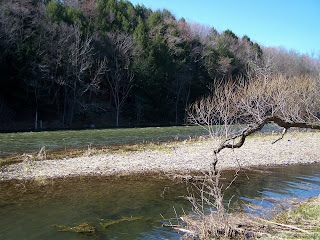 The unusually warm weather we had the last week had me itching to get out and check the area trout streams and I found most were still on the high side. There were how ever lots of stone flies 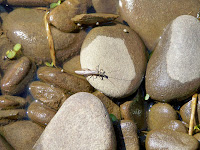 hatching and that gave me incentive to make some casts.
The stone flies did not seem to be getting the trouts attention but these sure didhttp://www.anglersflybox.com/double-bunny.html
It certainly was nice to be fly fishing the 1st week of April in upstate NY wearing a t shirt with stone flies in the air and active trout
Posted by The Anglersflybox at 1:14 PM No comments:

I know I have been negligent in my posting, and I will explain soon, but today I absolutely crushed the steelhead. Most were 8-10 lbs but some were BIG, I mean real BIG. These fish were as bright silver and full of piss as I have ever seen.
They were eating pink egg flies http://www.anglersflybox.com/glo-bug-pink.html and almost nothing else.
Have to go but there is more to come......
Posted by The Anglersflybox at 6:20 PM 1 comment: 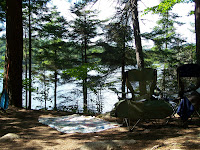 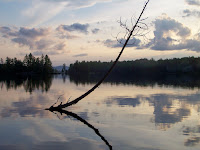 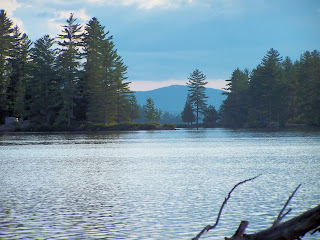 Wow the last few weeks have flown by,and what full weeks they have been. I have been tying flies, camping, and even managed a trip to a very remote wild brook trout creek that gave up a few spectacularly colored little gems,that rose to http://www.anglersflybox.com/dry-flys.html dry flies as if they had never seen an artificial fly before,then again they most likely never had.

The camping trip was fantastic, we had a very private site that sat up high over looking the lake and the weather was near perfect.I cannot believe how lucky we were with the weather as most of the summer has been just clouds and torrents of rain..

We were entertained by a family of loons which spent much of a day in front of our camp site with a baby loon that would hope on the back of its mother while she drifted around as the male dove for fish. Very cool to watch.

Unfortunately the batteries in the camera died ,so I did not get any pictures of the loons.

As far as fishing in the lake , it was non eventful. However later in the week I did some exploring of new streams, and revisiting some old haunts,and caught some really beautiful truly wild brook trout.I had almost forgotten how much fun it is to throw dry flies in small creeks, and dap the flies between boulders for fish that may have never seen an artificial fly before.
I also made a trip to the west branch of the Ausable, I used to love that river, and I still am awed by the scenery, but the actual fishery leaves much to be desired. Stocked fish with multiple hook scars, I will leave it at that.
In addition I fished another river that I had not fished in years, the only reason I revisited it is it happened to be the only stream I could find on the USGS that was not near flood stage at the time. Well I am happy I made the trip, it gave up some really nice trout and several land locks, all on dry flies..
The time between fishing,camping and working, has been filled tying flies and preparing to add to the selection of flies on the http://www.anglersflybox.com/site it will not be much longer and the selection will be much improved.
I think that sums up the last few weeks, I hope to get some more fishing trips in over the next few.
Posted by The Anglersflybox at 9:42 PM 1 comment:

The anglersflybox.com site will be expanding soon, I have been working hard at deciding what additional flies I should offer. Its funny, when I am tying flies for my self I normally stick with about 8-10 patterns, and with those patterns I can depending on hook size, be prepared for the rivers and streams I fish. But when it comes to deciding what flies to offer customers across the country, then it gets almost overwhelming. I get e mails from all over with people looking for all kinds of flies.Flies that I normally would not think about tying, and fishing with myself. So I will be adding about 24 more fly patterns to the selection in the coming weeks. I just hope I will still have time to fish myself....Just kidding.But years ago a good friend who owned a very successful fly& ski shop warned me not to get into the business unless I was willing to give up a lot of time on the water. He may have been right.
Posted by The Anglersflybox at 8:48 AM 3 comments: 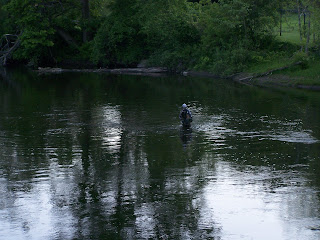 After eating dinner the other night, my wife and I took a ride by the local trout stream, now we were just going for a ride so I did not have my fly rod with me. I should be smarter than that. Any ways it was a nice warm evening and I knew that there would be at least a few spinners dropping but when we drove over the bridge the windshield was instantly smeared with may flys. Damn!!!... So I parked the truck and watched in envy as several anglers picked away at the trout sipping the spent spinners of the surface.That was a few nights ago.
Well today was my day off and I had an offer to join several other guys fishing the Delaware this weekend, normally I would jump at the chance to fish the west branch, but I could not get my lazy arse out of bed till almost 7am, to late to really make the run down for just the day, so I hit a nearby wild trout stream instead. I did ok, landing several nice trout,but I noticed something disturbing. Every spot I fished there were foot prints from other fisherman,not good, In the past I have gone entire seasons in some of these sections and never seen another angler, now it almost looked like the trails along the salmon river. Like another Blog I follow said "never ever , ever talk about the fight club", well some one apparently has. Seeing signs of that much pressure on that particular stream kinda of ruined the trip.
So after I got home and ate dinner I decided to go back out fishing, this time heading to a more well known stream, the same stream I witnessed the spinner fall several nights earlier. Conditions were very similar to the other night, very warm and calm, just about ideal for some great dry fly fishing. The only thing lacking was the flies, and the fish. No mayfly's, no rising fish. I guess that's why its called fishing.
Posted by The Anglersflybox at 9:30 PM 2 comments:

The Anglersflybox
Supplying anglers with high quality low priced fishing flies. I am a fly tyer and flyfisherman , most definitely not a writer, so take this blog for what it is, a way for me to keep in touch with some of my customers from anglersflybox.com and report on the fishing experiences I may want to share,so please do not expect to find deep intellectual writing, that is not the purpose of this blog.